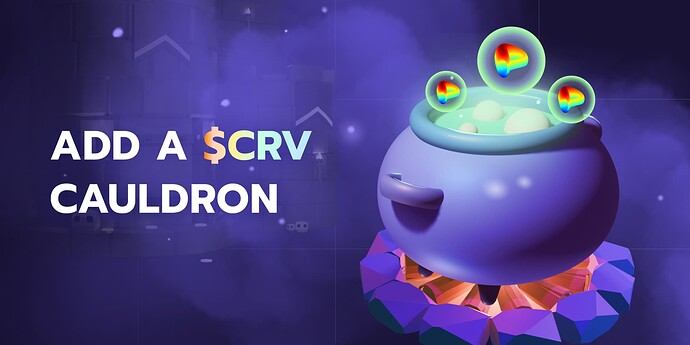 Abracadabra has been an ardent supporter of the Curve ecosystem, accepting naked CRV as collateral is a valuable addition to the cauldron lineup.

Given recent developments in the DeFi ecosystem, showcases strong borrow demand that is unmet by other protocols. Abracadabra is in a unique position to issue loans against CRV and benefit from interest rates.

The Curve protocol is one of the most decentralised protocols across all of DeFi space. CRV tokens not only have deep liquidity, but are listed on a variety of DEXs and CEXs. This will allow third party liquidators to easily liquidate in the event that borrow positions fall below their minimum collateral ratios.

Liquidity analysis suggests that selling 1m worth of $CRV tokens in the current market conditions would create a slippage of approximately ~3%.

By applying a conservative MCR (i.e 75%) and a large liquidation fee (10%), a buffer to safely liquidate positions is created. Reducing the risk of bad debt for the protocol, even in situations of extreme volatility.

Cauldron top ups start at $10M $MIM while monitoring risk metrics and backing of MIM. Due to the current health $MIM-3pool the protocol can venture into new markets, like CRV and obtain a significant amount of fees.

The interest rate is in line with other isolated lending markets and competitive enough to capture significant market share of CRV holders.

With the given parameters, and an initial top up of 10m dollars, this cauldron generates approximately 1.8m $MIM over a one year time frame for the protocol and $SPELL holders.

This CRV cauldron would generate significant fees for the protocol.

Depending on CRV liquidity, CRV trading volume, and circulating MIM, the cauldron top ups can be ramped up over time.

The following cauldron would use V4 cauldron contracts and would be deployed on Degenbox. Adding variable interest rate, upgradable oracles, and built-in strategy rebalance functions (in case a degenbox strategy were to be proposed on top of it).

CRV Chainlink oracle for this price feed can be found here.

This proposal has passed with an absolute majority.

Yes add a naked $CRV Cauldron!! This will no doubt be a popular Cauldron! Awesome RFC Romy!!

One of the most traded and valued assets in the space, it would be shame not to offer a market for curve and it’s ecosystem participants. In healthy market conditions, may I suggest a rate that provides + delta to cvxcrv and or ycrv.

Hey @Romy, I love CRV and the idea of a cauldron built on it, but I’m not sure I’m following the rationale for 18% interest. If this is an unlocked, native token (not a wrapped veCRV derivative) the interest rate would be right around the same rate as the yield on cvxCRV etc. It’s 3x more than the next highest interest rate (SHIB) and feels excessive to me. Am I misunderstanding something here?

Yep, issuing MIM is something expensive for our protocol. Especially if we take as collateral an asset that, despite being a DeFi Bluechip, is still not super liquid (like WETH or WBTC).

The rational behind 18% is that in order for the protocol to take on this risk, it also needs to be paying well for treasury and SPELL holders.

Remember that this would be a V4 cauldron, hence we can reduce the interest if this risk was to become lower, for example because liquidity drastically increases.

Something like the FTT cauldron is the perfect example of this, it was causing a huge risk for the protocol and paying really low amounts. Definitely something we have to move on now!

Thanks for the quick reply! Yea, V4 variable rate helps, we can start high and adjust over time… And I’m painfully aware of the bullets we dodged with both UST and FTT (big congrats on evading those btw!). I guess I / we will need to wait and see what market demand looks like for 18% interest on a non-yield-bearing collateral asset. Personally, I’d be more interested in a similar cauldron if it was built on (wrapped, staked) cvxCRV and at least the yield on the collateral was offsetting the interest.

Would it help knowing we are working together with yearn to have a yCRV cauldron soon?

Yes Ser!!! While we’re chatting (been a while btw…)

I do love the new UI, but have to tell you I miss the way the V1 UI would show you the current yield % of the collateral in question and calculate the yield resulting from a leverage position. I fear we went so far towards making the UI simple that we lost one of the “killer features” of the V1 UI, which was the ability to “shop” for yield and make leverage choices based upon projected Health Factor and resulting Position APY. Now users see very few choices unless they already hold a broad portfolio of assets in their wallet and don’t see the yield they are missing unless they do research / figure out how to find the old V1 UI. Could be a case of simplification reduced incentivization?

I kinda agree with you!

We are looking for a new FE engineer that will help us also revamp the UX of Abracadabra!

Could definitely do a better job advertising yield on stable cauldrons

I think we are ready to move AIP #13 forward and start a vote!

before we push to vote. Can we consider launching identical cauldrons for FXS and CVX? The three could all be pushed at once. Rates can be justified at 10-15% for both of these against yields in vlCVX and cvxFXS. Similar liquidity conditions exit in comparison to crv