The following RFC is made to propose to the DAO an interest increase on two different cauldrons in the Abracadabra Money line-up! 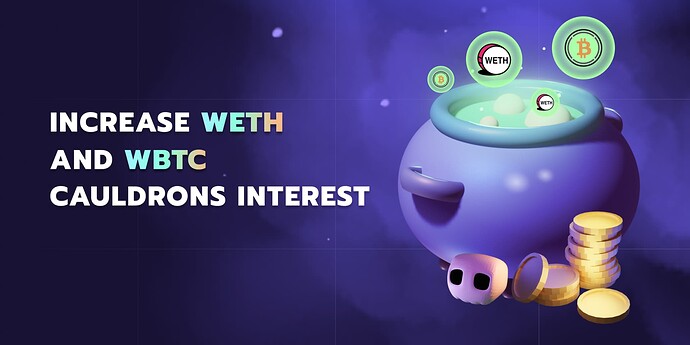 We currently have two interest-free cauldrons, WBTC and WETH. These cauldrons were used as powerful tools in the bull market to expand the $MIM monetary base and to grow usage but they now represent outdated tech and are costing the protocol money. The current stats and addresses for the cauldrons are as follows:

Every $MIM emitted from these cauldrons is injected into circulation and consumes the DAO’s limited SPELL set aside for emissions. We believe what once was a valuable tool to improve our user base and growth, is now something that we must improve. We’d like to utilise this $MIM to expand our presence on Optimism/Arbitrum where partnerships with Velodrome/Camelot/Rage Trade will allow the expansion of $MIM and new high yield strategies profitable for both users and the protocol.

One of the most important improvements we made in the V3 cauldron smart contract update was to make the interest rate adjustable. Unfortunately, the WBTC and WETH cauldrons are on an older version of the contract.

Despite this, after much investigation with the Abracadabra team, we now know that there is a way to increase interest rates on those cauldrons.

By using a “negative strategy” on top of those cauldrons, the DAO will be able to charge the current users an interest rate. Once applied, the negative strategy would begin shrinking user collateral, which is similar to increasing $MIM debt. Instead of repaying more $MIM than borrowed (due to interest fees), users will instead pay in collateral by removing less than they deposited. Unlike changes to performance fees or interest rates which were native functions of the newer cauldrons when launched, adding a strategy where there was none is a structural change to the cauldron requiring a vote.

Our proposal is to implement a negative strategy up to a maximum of 15% to encourage users to close their positions. If this proposal passes, there will be a 1 week period before the strategy is implemented to allow communication of the changes and for users to make plans to close their positions. After 7 days, the rate will be increased to 5% linearly over a 2 week period. From there, the team will assess the status of the cauldrons and determine whether further changes are needed. (Note: The protocol does not exceed the maximum rate of 15% on these cauldrons and will not increase the rate more than 2.5% per week, without further vote from the DAO).

The assets collected using this interest, will be treated as protocol revenue. We would like to ask the core team to specify exactly how often these rewards would be sold for more $MIM, from a technical perspective, to be used in the usual rewards distribution, before moving this proposal to AIP.

If and when users of these cauldrons repay their outstanding $MIM, the DAO would be able to utilise these $MIMs for more profitable cauldrons, and pave the way for growth of revenue.

The negative strategy was developed by the Abracadabra Core Team and was put on hold to complete security checks and DAO approval!

The strategy code can be found here.

Both of these cauldrons reside on Degenbox, so pushing this strategy should not be an issue.

The Strategy itself will be pushed to production, if the proposal was to pass.

It has parameters that are controlled by an owner, such owner will most likely be the big minting multisig (the 5 / 9) whose signers can be found here.

As with all of Abracadabra’s smart contracts, their code is fully open source and available for anyone to check in our GitHub repository.

Further changes to the interest rate

To allow the protocol to react rapidly to future events, further increases to the interest of those cauldrons will have to go through the DAO, but in a streamlined process allowing for more flexibility, I think @0xWicked ’s idea provides great guarantees to the protocol stability, so I’ll include it

If needed, the community will have the ability to propose to the DAO an amendment to the current AIP in the following form:

This Proposal is now ready to be moved to AIP as AIP #12.

The vote has ended, and AIP #12 has passed with absolute majority. More information on when the interest rates will be risen will be announced on twitter and discord!

I like the plan. It’s time we started working on delivering value to SPELL holders by focusing on revenue providing cauldrons.

Sounds to me like a well thought an in depth proposal!

I agree as well on shifting the focus towards SPELL holders revenue, and shift from growth to sustainability!

The way I see it, is that this is definitely the best path forward! As far as I know we are able to push the negative interest strategy as soon as this proposal is approved (if it was to be approved)!

I am not sure how long it will take to have the harvest bot working succesfully, but I will keep you guys posted!

@Melen @BrabDdy @mDreamy4 and all the other mods involved, amazing work!

Lets keep an eye on the suggestions on this, and see if we can improve it somehow before moving it to AIP and allow SPELL holders to vote!

I cannot comment on the code in this section as i don’t have the technical expertise.

As to protocol design, the initial advertisement phase of MIM is complete in most regards. Their is no reason for MIM to be minted at 0% rates and 0% fees. I support the rate increases and think this bolsters a scheme where protocol revenue per MIM begins to increase. This is absolutely necessary from a MIM stability stand point with current market liquidity, it is also necessary for a spell price point. More revenue, greater protocol value, price of spell goes up, spell unit emissions can be reduced.

I find it extremely ironic that my realization of “unit of exchange” payment fits perfectly with the model of negative interest rate cauldrons. I have immense support for capturing revenue in this way as we don’t need to sell our underlying assets to capitalize as a business. Going forward, I hope that each cauldron operates in this regard.

I think we can expand this caps to 25% and 5%. As we have seen with aave- it is not uncommon in these markets for rates to grossly exceed what anyone would believe. If we need to deleverage MIM supply, we need to have the capacity to do it which forces people to move quickly. 15% and 2.5% dont do it for me. 500bps in a single week gets attention.

We should sell negative interest revenue as we have historically done in the past. Weekly. Until debt is paid, their should be no model of investment. Our treasury made that decision when we liquidated the majority of our curve position.

The strategy has a function to swap the rewards for any given token, I could see the ETH and WBYC being swapped for MIM and integrated as revenue directly.
It’s a technical possibility

I strongly support this. Please discuss amongst team members

as you create ycrv/crv leveraged cauldron , please consider crv as a payment alternative as well.

Added a design graphic, with the consent of the mods!

You have a good point. The protocol should not limit itself with caps of max 15% and 2.5% a week increase.

(Note: The protocol does not exceed the maximum rate of 15% on these cauldrons and will not increase the rate more than 2.5% per week, without further vote from the DAO).

The original RFC kept exactly this in mind by indicating the possibility of further increasing the cap, if the DAO votes on it. Maybe we add an exemption to the regular process of voting towards these rate limit changes.
Meaning that if the DAO needs to increase these caps, we would not need to go through the entire governance framework, but could directly vote on an AIP.

The next question is, if we should adjust this RFC to the maximum rate of 25% and max +5% weekly increase, but have a target rate of 15% with a 2.5% increase. This allows us to quickly raise the rates if the need arises, but gives us a clear target to adhere to right now.

I like this plan a lot, no reason for promo prices in this market.

I think there should be a dedicated UI in the app for making these kinds of changes clear to users. Some simple central notification feed would work.

Wavey from Yearn here. I enjoyed reading this very clear, and well-written proposal.

The only downside I see here is that it may surprise depositors who were not aware of any mechanism to add an effective fee. This is a valid concern.

However, Abra’s ability to retain control over critical protocol parameters such as interest rates is paramount and long overdue.

With continued communication and transparency around this plan it seems like an obvious win for Abra. I fully support this move from the core team and their push to find creative solutions for weathering market conditions, and making the protocol’s healthy positioning a priority.

Thank you @wavey for the feedback, always happy to see the opinion of key players in this industry here on our forum!

I think this is a very valuable framework for some time sensitive increase on such cauldrons. We should implement it in the proposal.

Looks to me like this proposal is ready to be moved to AIP, @Melen.

Do you think we should add anything else before proposing it to SPELL holders?

I like that idea a lot, once an initial proposal regarding interest rate change is passed, changes to those parameters could be fast tracked for further flexibility.
Added it to the main proposal

I don’t think it’s reasonable to force the lender to return the borrowed money (even if it’s by way of increased interest). The borrower borrowed the money and took it to make an investment ,he must have made 2 results now : 1)made a profit or 2)lost some money . But now it is almost a requirement: the borrower must have made a profit on his borrowing at this point in time (in order to repay it) .
It is unlikely that a normal lending platform would have this, suddenly saying that the money must now be paid back. This is so unfair to borrower ，especially retail borrowers. They may only have this borrowed money and don’t have any other extra money to pay back the loan.
During this bear market ,it’s very impossible for retail borrowers using his borrowed money to make a profit . For retail borrowers who don’t have extra money to divert, it’s almost like starting to liquidate it.

I think selling depositor collateral goes against the initial terms of the cauldron, it could create really unpleasantl surprises for users and would be bad for the reputation of the project.